THE END TIMES, Canberra, one hundred light-years behind (NotScientist) — A two-hour meeting with Australia’s Chief Scientist Penny Sackett has failed to convince Family First Senator Steven Fielding that human activity is the main cause of climate change. 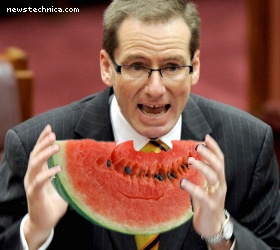 Senator Fielding also expressed scepticism concerning chemistry, physics, evolution and the “Galilean heresies” concerning the Earth and the Sun and was not entirely sure of this new-fangled “arithmetic” or its place in our schools. He was unimpressed by Dr Sackett’s “evasions” when he questioned her. “When I asked her ‘why do carbon emissions only prove the Earth is six thousand years old and we’ll all have gone to Heaven in the Rapture by the time it becomes a problem?’, she wanted to rephrase my question and not answer it. Then she’d bang her head on the wall, I don’t know why.”

Senator Fielding has recently returned from a fact-finding mission to the United States, where he met with several climate change sceptics and Discovery Institute scientists who revealed to him how “magic beans” were responsible for temperature rises. “We also established that homosexuality causes greenhouse gases. But if we can filter the carbon dioxide at the Internet, apparently, we should be able to stop it dead in its tracks.”

The Government’s prospects of getting its carbon trading scheme through the Senate this fortnight rest with Senator Fielding and other crossbench senators who hold the balance of power. The Greens and Independent Senator Nick Xenophon also refused to back the scheme, but are thought to understand basic logic and mathematics and so may have objections that do not cause neural injury to contemplate.

One thought on “Fielding annoyed by “scientists” disagreeing with him”