THE STARVING CHILDREN IN AFRICA, They Sent It Back Too, Monday (NNN) — The Food Standards Agency has announced new mandatory voluntary targets for food manufacturers to cut the amount of salt in bread, bacon, breakfast cereals and soup by 2012. 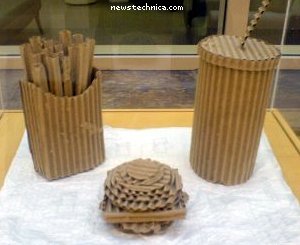 The FSA says reducing daily salt intake to 6 grams from the present 8.6 grams could prevent twenty thousand deaths from high blood pressure. “The best way we can achieve this is to make food taste as much like cardboard as possible. Sugar’s out too. This will also allow us to meet obesity targets, as no-one will be able to face eating and will merely have to drink themselves to death. ’Cos they can’t smoke any more either.”

McDonald’s has complained of people bursting in off the street, grabbing handfuls of those little salt packets and running out again. Police have warned of gangs of youths shooting each other with knives over contraband seasoning and speaking something that sounds like English but would probably be better transmitted by SMS.

Cardboard manufacturers looked forward to a windfall, with Ryman’s announcing a new line of pre-salted notebooks and filofaxes in salt and vinegar, cheese and onion and crispy bacon flavours. “Just quietly, sir, we’ve got some juicy pens in too, since you’re a regular and all.”