CYBERMANDY, The Information Super-Motorway, Monday (NNN) — Peter Mandelson has launched LabourListing.com, a completely independent Labour Party website not affiliated or controlled by the party in any way whatsoever. 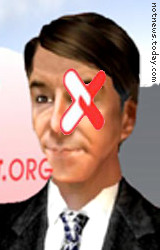 “Spin is dead,” said Lord Mandelson today. “We’ve issued a press release to this effect to our favoured journalistic contacts.”

The site features an avatar of Lord Mandelson, a small “Handy Mandy” figure, to guide the reader through a very special Labour experience. Handy Mandy will offer the reader a completely free choice of several places to go to next, all leading to the same following page.

To compete with the highly successful ConservativeHome site, LabourLurching will feature:

“The project will only work if we can end top-down politics,” said Lord Mandelson. “I am, of course, the first person anyone would think of for such a task.”

2 thoughts on “Labour takes back the “Web””