FEDERATED EARTH, The Future, Now (NNGadget) — After a minor shipping delay, flying cars have arrived for all. As of today, all major cities also feature moving pavements and weather control and commuter flights to the Moon will be commencing tomorrow. 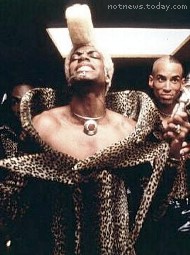 Earth President-Elect Barack Obama welcomed the representatives of the Galactic Brotherhood to Washington, assuring them that the many wars on Earth were now to be conducted entirely by robots, though the robots would be carefully monitored and pulled out of battle and granted citizenship the moment they achieved sentience. He also offered the galactics free access to Google, with only the requirement for tasteful contextually-attuned text advertising to be imprinted on their DNA.

The reactionary forces of the twentieth-century United States finally conceded defeat and shut down the Five-Year Plan Tractor Plants of Detroit, where ridiculous oversized transport was bashed together by semi-literate peasants between fifths of vodka from the nerve gas factory next door, and the Five-Year Plan Software Plants of Redmond, where ridiculous oversized operating systems were bashed together by semi-numerate fresh graduates between fifths of Red Bull. The record and movie company back catalogues have been placed into the public domain for the preservation of human culture and the comic-book capitalists of Wall Street have been sent to calming, soothing, humanistic re-education facilities. “We’ll teach them to love again,” said Mr Obama.

Robot housecleaners are now universally available at quite reasonable prices. The robot companion for your child, designed to say “I LOVE YOU” while the child hits it repeatedly, was an early release for Christmas 2007. The new model features the voice of Justin Fletcher from CBeebies and is designed for parents to hit repeatedly.

Future innovations for the century include the rise of the Great Old Ones from their eternal sleep to take back the Earth and consume the souls of all humanity, first driving them slowly insane. The citizenry is being prepared for this eventuality using repeated broadcasts of In The Night Garden.