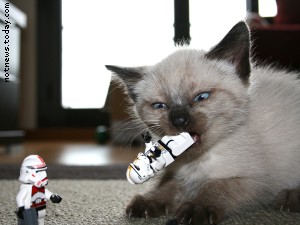 In Star Wars: Journey To The Bottom Of The Barrel, the Royal Philharmonic Orchestra will play a live score as recreations of scenes from the six films with amusingly-captioned kittens are shown on a cinema screen.

It will not be a traditional musical with actors playing characters from the films, but will feature live narrators, speaking authentic lolcat dialect, as painstakingly reconstructed by linguists.

As well as the destruction of the Death Star (an exploding Wikipedia puzzle globe) and various love scenes between Anakin Skywalker and Padmé Amidala (rendered with the relevant LEGO® figures), there will be several of the epic battle scenes for which Star Wars is famous, featuring Airfix model spacecraft taking on miniature cardboard battleships, as held in the jaws of cute kittens.

“Star Wars holds memories for practically everyone,” said George Lucas. “I can’t think of anyone who won’t be simply thrilled to have those memories lovingly caressed by these reconstructions. They’ll be particularly pleased to know that JarJar Binks is back, warning Han that Greedo is about to shoot first.”