NOVEMBER SURPRISE, Pennsylvania, Monday (NNN) — Ali Hamza al-Bahlul, accused of being Osama Bin Laden’s media secretary, has been convicted by a US military jury at the Guantánamo Bay detention centre. 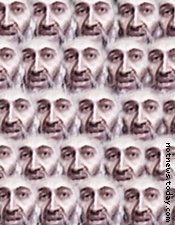 He is the second prisoner to face a war crimes trial under a specially-created system of military commissions that Republican activists and lawyers have praised as working efficiently to reach the correct answer.

“This is the finest justice the military can buy,” said Still-President George W. Bush. “It took us a speedy six years to securely convict him in a military court with a jury of army officers. The world can rest assured we’re not just tidying up loose ends or nothing.”

The goverment was quick to assure the press that this display of American might would cause the cowering, cowardly Al-Qaeda to just give up and go home.

“I want to leave a really good legacy for my successor,” said Mr Bush.