LLANLLUBBER, Carmarthen, Saturday (NNN) — A Welsh separatist sheep, Sparky, has been peaceably brought down with a taser on the A55 by North Welsh police.

The sheep, a member of the Radical Jihadist wing of Plaid Cymru, was attempting a dangerous public demonstration that sheep could work as well in riddles as any chicken. 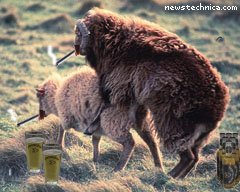 A police spokesman said: “We received numerous calls reporting a loose ram crossing over both carriageways of the A55 at St Asaph, calling for jihad, causing major disruption and possible danger to motorists. Besides, he had a knife! And child pornography!”

Kate Fowler-Reeves, head of campaigns at Animal Aid, said: “This animal, already a victim of an oppressive farming industry, was treated like a violent criminal. He deserved instead to be treated with some sensitivity and respect, and due process as to the illegal search and seizure of his bomb-making equipment and copy of My First Taliban.”

Richard Brunstrom, chief constable of North Wales Police, said that the 50,000 volt electric stun gun would provide “better and quicker protection to ordinary patrol officers in remote locations, faced with dangerous or violent sheep. I volunteered to be a target for a taser so I could feel the effects of the weapon. My doctor has restricted me to only going back no more than monthly, however.”