BODDY MANSION, Hill House, Thursday (NNGadget) — iTunes 8, released with the new iPods on Tuesday, causes Blue Screens of Death on Windows Vista. Apple and Microsoft enthusiasts quickly fell to heated message board discussion of which company was to blame — but equally quickly fingered the culprit. 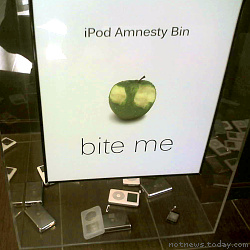 The Suspect, Weapon and Location cards revealed were Linux, in the Basement, with the Emacs Macro. But the motivation remained unclear.

“Yes, it was us,” said seventeen-year-old Debian maintainer Hiram Nerdboy. “And we’re proud.” A faint ammoniated cat piss odour came forth as Nerdboy ranted his confession. “Your effete desktops are a drain on the minds of millions! Mental resources they could use to learn simple tools like Lisp and Haskell! Is time actually cubical in nature? Your 3D desktops and games and shallow interfaces hide the true power, elegance and beauty of the command line! One Dimensional Desktop, with infinite compactified dimensions hidden inside like string theory — intuitive and obvious! I wrote an Emacs macro that plays one of my Ogg Vorbis sound files any time I like! How is iTunes easier than that? 4 simultaneous 24 hour Days within only 1 rotation of 4 quadrant Earth! Educated evil and stupid! LINUX SHALL TRIUMPH! … I’m sorry, I meant GNU/LINUX SHALL TRIUMPH! Sorry, Richard. Sorry. Sorry.”

“Geez, dude,” commented Mac user and first-day iPhone buyer Arty Phagge, “get a girlfriend. You’ll feel better,” he said, sipping his latte before his appointment to touch up his Apple logo tattoo.