CANTBEARSED, East Cheam, Friday (NNN) — UK economic growth ground to a halt between April and June, according to official statistics. 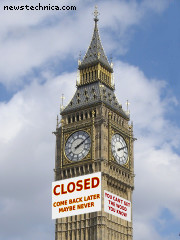 Economic activity has ceased, with nothing being bought or sold. No-one has shown up to work in the last two weeks. Tube stations have been buried under uncollected copies of Metro. The populace have given up eating, choosing instead to sit humming and staring into space.

House prices have dropped 99.998%, the last recorded offer being five quid and a bottle top. “I didn’t take it because I couldn’t be bothered,” said Boris Busybody, 77 (IQ), of East Cheam. “Not that anyone else will be asking.”

Fears of Mad Max-style gangs roaming the country with guns and flamethrowers have failed to come to pass, owing to a shortage of paraffin and general apathy. “What’s the point?” said tribal gang warlord Ravencrush Hornbastard. “There’s no telly on anyway and the shops are all shut. What would we spend it on?”

“It could be worse,” said treasurer Alistair Darling. “We could be trying to use the US dollar as currency.”