VATICAN RAG, Rome, Monday (NNN) — The global financial crisis is proof that the pursuit of money and success is pointless, Pope Benedict XVI has told the Twelfth Ordinary General Assembly of the Synod of Bishops in Rome. 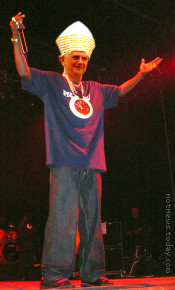 “Those who seek success, career or money are building on sand. They should look instead to the Church and build on the solid rock of guilt, sexual repression and jam tomorrow.” Attendees duly placed sand into the collection plate.

“The Church must bring people to a vivid encounter with God,” said the former leader of the Holy Inquisition. “There is no reason to fear that the church and its members will go too far and harm freedom,” he added, leaving everyone feeling thoroughly reassured.

Secular governments, he added, have “no reason to fear” the social teachings and activities of the Church, which “does not aim at power, nor does it expect privileges or aspire to economic or social advantage,” in an inexplicable change from hundreds of years of historical evidence.

SOYLENT GREY, London EC1, Monday (NNN) — The Organ Donation Taskforce has delivered its report to the Department of Health, recommending presumed consent and an opt-out system for organ donations, particularly from surplus bankers.

The “Banks for Banks” initiative was launched with tremendous fanfare today as a group of newly-redundant Lehman Brothers employees proceeded to tear their bosses limb from limb. The ice for the champagne proved adequate to the task of preserving the bodily parts until they could be taken to a hospital and scanned for sexually transmissible infections, cocaine-induced septicaemia and mad cow disease. 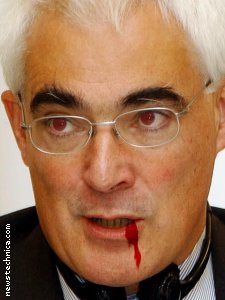 Transplant surgeons have long lamented the non-opening windows at Canary Wharf, which would have tremendously helped the nation’s organ banks as well as the post-collapse job market.

Secretary of State for Health Alan Johnson praised the tremendous progress Department of Health researchers had made in reprocessing City bankers into something actually useful to humanity. “London will never again want for speed humps, shooting targets or anus transplants.”

A law will be passed that City traders who opt out from the European Working Time Directive will be presumed to have consented to being rendered down. “After a few weeks of that you’re the walking dead anyway.”

Chancellor Alistair Darling promised to safeguard the jobs of 1,500 Bradford & Bingley mortgage staff for six months after the nationalisation of the bank’s lending business, at which point almost all of them started arranging to emigrate. 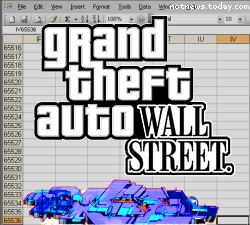 In the end game, being run as a Live Multiplayer Weekend from Friday through to tomorrow, the final “boss” is the US Treasury. Defeating this character depends on the player’s posse putting enough game points into play to crash the whole game if they are killed. Success earns the player and his team a 700 billion point bonus.

Controversy surrounds a download available on the net called “Hot Latte,” which is said to unlock secret insider trading scenes. However, the final edition of the game is unlikely to feature explicit criminality, sticking only to the socially-sanctioned variety.

Dan Houser, chief of game developer Rockstar, said: “Our games are intended as entertainment and relaxation for mature adults, not children. GARÇON! MORE COKE AND HOOKERS OVER HERE! CHOP CHOP, S’IL VOUS PLAÎT MATE! We are of course very happy to continue to work with all responsible bodies on these matters, as previously.” He then proceeded to snort an entire gram in one hit. 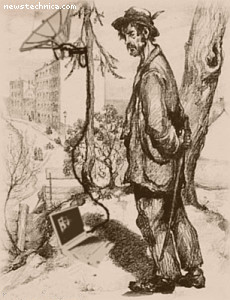 “My box was appreciating at ten thousand quid a week last year. Now it’s worth 50p. My life savings gone up in credit crunch!” said Bob. “Mister Foul, if you please, thank you.”

Jason Scum, of Wrongmove and Bastard, concurs. “I was selling looogshury boxes, seven foot by four foot, 150K this time last year. Sky dish and broadband fitted! All mod cons, luvverly neighbours, ex-cellunt views. A snip at 200K. You couldn’t spare a fiver for a line of coke, could you? I’m givin’ you my valuable time,” he said, waving his handful of Big Issue as random passing house owners threw what tomatoes they could spare at him.

After a decade-long housing boom, credit is all but unavailable. “Let’s just check yer Experian report … Failed to pay back little Johnny Turd that shilling in 1968? Ooh,” said ex-bank manager Dick Fold of Lehman Brothers, inhaling through his teeth, “’s gonna cost ya, guv. Not sure I can spare you that can of Super now, fag end or no.”

Overseas property sales in such highly desirable locations as North India, the Mongolian deserts and the Siberian tundra have also suffered, despite incredibly tempting Tube ads with four-colour photos of villas surrounded by trees. “I just don’t understand it,” said Scum, sucking from his bottle of meths.