PRODUCTIVITY HOME, London EC1, Wednesday (NTN) — The Chancellor, George Osborne, will be “streamlining” employment regulation to revive the economy, having discovered that the recession was all the fault of the workers, rather than, e.g., the bankers. 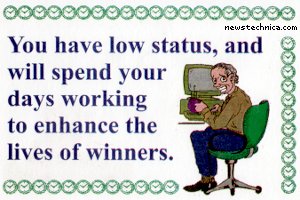 “Current employment law contains too much bureaucracy,” said Mr Osborne. “Apparently you have to fill out paperwork before firing someone!”

Consumer confidence and willingness to spend will be hugely enhanced by consumers knowing they could be fired at five minutes’ notice for any reason or none. “Senior management are consumers too, you know.”

“Workplace relationships have changed dramatically over the last decade,” said the Confederation of British Industry, “with employees having become much more accustomed to eating shit for a living. It’s time the law reflected our donations to the Tories.”

With the abolition of the retirement age, workers will no longer require pensions, having been given the completely free choice, as empowered and independent participants in society, to keep slogging away until six months past the point of actual death.

The Liberal Democrats stressed that they would moderate the proposals in a “muscular and visible” manner, strictly rationing the number of children to become chimney sweeps to a mere 95% of Tory proposals.

Labour said the proposals would make working life less secure, but somehow having Ed Miliband plead the workers’ case didn’t give anyone a sense of reassurance.