REGAL ZONOPHONE, Pathé News, 1928 (NTN) — An alleged time traveller has been spotted not using a mobile telephone in a 2010 video on YouTube. 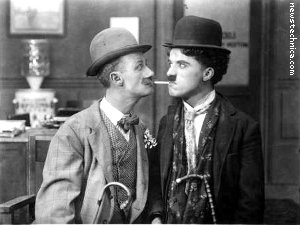 The apparent time traveller, clad in a hat and coat, walks into frame appearing deep in conversation while holding nothing at all to her ear, thus showing her using sheer empty space for wireless communication.

“This Super-8 film I’ve made shows the ‘chrononaut’ quite clearly,” said Albert Tedious-Anorak, 54, of Little Boring. “You can see the woman putting her hand to her head without holding a mobile phone or anything. This gesture is so remarkably anachronistic that a gross violation of physics is clearly the simplest and most obvious possible explanation, and definitely not anything that doesn’t get my name in the papers.”

The Super-8 film of the YouTube clip has been put up on YouTube and has gained thousands of views since incredibly bored journalists filled a space with the story. Speculation is rife on the site as to what the object actually is that she is not holding.

“Nikola Tesla anticipated this, you know,” said Mr Tedious-Anorak, “and you can read all about it in my self-published magazine which I—” At this point the film reel ran out.