SHIPMAN TEACHING HOSPITAL, University of Crippen, Monday (NTNHS) — Nearly a quarter of English junior doctors drop out of their NHS training after two years of shovelling twice the shit in half the time with no guidance or funding. The government blamed Europe. 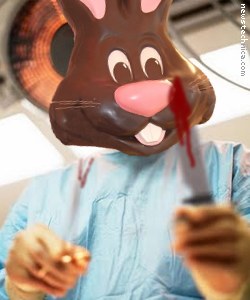 The EU Working Time Directive means that junior doctors are no longer free, as independent individuals, to work any 120 hours a week they choose, with patients reaping the full benefit of being prescribed medication by someone who is hallucinating that they are a giant psychedelic rabbit carrying a watermelon gun.

Of those who did want to continue, 22 per cent were not accepted by NHS trusts, which was obviously their own faults for not getting out there and gathering one-on-one mentoring while they wandered deserted hospital corridors at 3am.

The British Medical Association said the issue was high workloads and no consultants available to supervise. The government said there was no evidence of this, because they had taken care not to gather it.

“It’s inexplicable that so many people who have wanted to be doctors since they were three get into a hospital after years of study and quit, just because they discover that every individual moment of the job is shit and the best they can look forward to is being glorified technical support and telling sick people they’re fat for the rest of their lives, and spending the other two-thirds of their time covering someone’s arse or doing paperwork,” said the Department of Health. “It’s definitely Brussels at fault.

“But I can assure you that there will be no return to tired doctors working excessive hours. Any doctor you encounter will be fully alert from working only the proper hours allowed by law, should you ever be so lucky as to find one.”