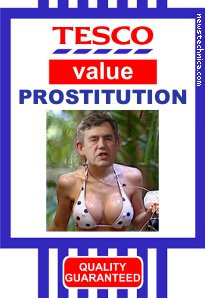 Former ministers Geoff Hoon, Stephen Byers, Patricia Hewitt, Adam Ingram and Richard Caborn denied any rules were broken and said the bits where they offered to “do it in any position you like, anywhere, even right up there on the front benches, if the money is right, luv” were “taken out of context.”

A new system was being put in place, said Mr Brown, as a result of “unfortunate errors by MPs and terrible media misconceptions” that would be “open and transparent” for the future. “I was shocked and appalled by these goings-on, which of course I knew nothing about. Nothing whatsoever.”

Mr Brown promised “massive changes. There’s got to be a register of lobbying interests, there’s got to be openness and transparency in the expenses system. We can also promise a chicken in every pot and a free bag of money for every reader. And all of this before June! Vote now! While you still can! Or I’ll do that thing where the corners of my mouth go up again. I’m warning you.”

David Cameron called Mr Brown’s comments “the transparent desperation of a failed government. Of course, we would never allow lobbyists that close to Parliament. We’re just putting them up as our PPCs instead.”