DAS BUNKER, Redmond, Friday (MSBBC) — Cheap netbooks are too limited and no-one will want them any more, say high-ticket vendors at the mere 103% increase in netbook sales in 2009 over 2008. 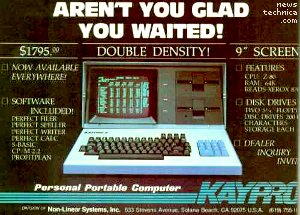 The small, portable computers sold in stupendous numbers in 2009, but industry watchers have been convinced by Microsoft and Intel to say that their popularity is waning. “No-one is buying a 10-inch netbook that costs £500 and runs Windows 7,” said Stuart Miles of Pocket Unit. “So everyone will go back to expensive iPhones and full-sized laptops, any day now. This ‘internet’ thing is just a fad too.”

What people are looking for now, he believes, is a machine that can keep up with the demands of contemporary web users. A small netbook running Windows 7 Dumbass Edition™, which runs up to three applications at a time and holds your data hostage until you cough up eighty quid to run a fourth, is “thoroughly inadequate” to the task. “Linux, of course, doesn’t exist, wasn’t the impetus for cheap netbooks and didn’t cripple Microsoft’s bottom line for the last three years by providing actual competition for the first time in decades. So it’s not like it can do twice as much in half the space.”

Ian Drew, spokesman for chip designer ARM Holdings, also believes netbooks are in for a shake-up. “Apparently, netbooks that weigh nothing, run twice as fast and have an all-day battery but don’t run Windows are a problem for ARM, not for Microsoft,” he said, lighting a cigar off a fifty-pound note.

Mr Miles believes tablets will take up the mantle from the netbook. “If we carefully define tablets as ‘not netbooks,’ even though they’re made by the same companies with the same technology running the same software, we can claim the netbook is dead even though people are suddenly realising how stupidly huge, unwieldy and heavy even a fourteen-inch laptop is. It’s all about picking your terms rather than, e.g., selling what people actually want instead of what you’d like them to want. Also, if you whack in a 3G modem it’s suddenly a phone instead, and never mind the Mini 9.”