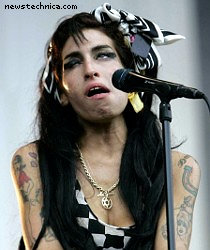 “Amy took an over-the-toilet-sink preparation for a cold,” said some money-grubbing scrote willing to make up complete bollocks for a journalist, “or something to do with her nose, anyway. But evidently she ran short. She’s making damn sure this never happens again.”

The singer recently had her breasts replaced with cyborg implants containing laser cannons, a GPS tracker to find her way home from the pub and a paparazzi detector that automatically exposes them to camera lenses. She has reportedly been considering a second boob job to get back the figure she had before becoming a drug hoover, buttock implants, brain implants and clue implants, though there is fear her personality may reject these. She has been working on resculpting her nose from the inside, as well as scribbling on designer freckles with a sharpie. 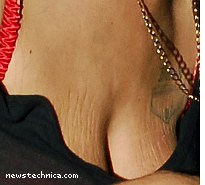 She is also planning a children’s doll based on her new polymer bodywork. “I think I’m a role model for young girls these days,” she said. “They act a lot like me, especially on Saturday nights.”