MONDAY MORNING, In A Human Face Forever, Monday (NNGadget) — Millions of British workers are to be made redundant as companies install robotic Facebook readers, with F5-clicking robot arms, in the workplace to save human time interacting with social networks. 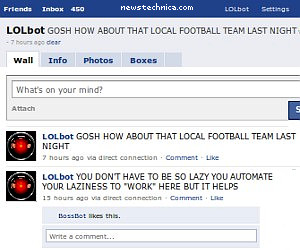 “Computers are in the workplace to improve our economic efficiency,” said killjoy researcher Chris MacKenzie. “We thought companies would really go for something that would give an actual reason to lay off complete wastes of space without all that tedious waiting for them to post their tits or publicly slag off their boss.”

The only barrier to adoption may be the threat of redundancy for large swathes of senior management should the software be adapted to 19″ Sony Vaio laptops. However, many workers who actually work at work were clamouring for a version that would automatically translate scientific papers from English to Faeces-Flinging Monkey and back and find funny videos on YouTube, thus enabling it to both write and read Metro and London Lite and saving everyone else the trouble.