RUHNAMA, Niyazov, Monday (NNN) — Hugo Chávez has promised to speed up “the construction of true socialism” in Venezuela now that he can stand for re-election indefinitely. “We have exploded the barriers to a permanent socialist revolution.” 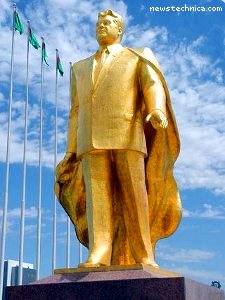 “Chávez has changed Venezuela from the sky right down to the earth,” said the completely typical Venezuelan citizen our reporter was supplied with. “Now there are opportunities for all, from the richest to the most deprived. The people love him. We cannot go back.”

Chávez has already taken control of the country’s vast oil wealth, expropriated private landholdings and businesses and instituted a programme of deep social reforms. He has attacked the “distribution of wealth” problem by destroying as much of it as possible. After Chávez promised to nationalise the biggest power and phone companies, the Caracas Stock Exchange closed nearly 20% down, Electricidad de Caracas fell 25% and CA Nacional Telefonos was suspended from trading. The Venezuelan Bolivar has been replaced in common use with twigs and small rocks, which suddenly have much greater practical exchange value.

Chávez next wants to merge all his coalition partners into a single party, remove the opposition television channel, nationalise key businesses and rule by decree for a year. However, construction of a one-hundred-metre tall gold statue of himself in the Caracas city square that turns to follow the sun will be delayed until next year, and renaming the days of the week and months of the year after himself and his mother can wait until the year after.

Fidel Castro expressed his confidence that Chávez was in no danger from the US. “This is the CIA we’re talking about,” said Castro. “They could fuck up a wet dream. Hey, maybe they’ll try the exploding cigar trick again. That’s a good one.”