TORCHWOOD THREE, Cardiff, Monday (NNN) — Actor John Barrowman has apologised for exposing himself on live radio on Sunday evening. Two complaints were received about the incident, from listeners J. Ross and R. Brand. “We are appalled and outraged,” they said. “We told the Daily Mail and they thought it was funny.” 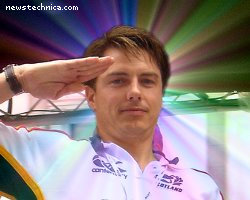 Barrowman apologised for any offence caused. “I was joining in the light-hearted and fun banter of the show and went too far. I was wrong to do this and it will never happen again. Next time I’ll just say I am and not actually do so. This will make all the difference to our lovely Daily Mail-reading listeners, every one of whom I would have a romantic interlude with. Except I’m gay and married.”

Georgina Baillie was shocked. “I’m shocked, I am. Sure he doesn’t go for girls just a bit? Maybe after a few drinks when his friends aren’t there to see?”

A BBC spokeswoman said: “We do feel that the programme overstepped the mark. We are determined that lessons will be learned from this incident. All BBC radio shows going forward will contain only simulated willy exposures, with the willy exposure substituted with a Radiophonic Workshop sound effect. Probably some sort of ‘Ba-DOING!’ sound, a processed version of the sound of a wooden ruler vibrating on a desk. Everyone loves that one. In addition, we will talk about Y-fronts and boxer shorts rather than willies and balls.”

One thought on “Barrowman exposes himself on radio”