SKATES, Pompey, Friday (NNN) — Portsmouth City Council is introducing CCTV cameras claimed to “predict” if a crime is about to take place and alert operators to suspicious behaviour, such as loitering, apparent thought in public, walking while brown or not spending money fast enough. 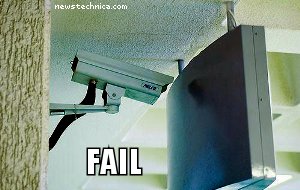 “Only a criminal terrorist paedophile with something to hide could possibly object,” said councillor Jason Fazackarley. “Criminals will pay much better attention to their dress and grooming with cameras there. Channel 4 has tentatively offered us a reality TV show. And Channel 5 would quite like the tapes of drunken shagging in shop delivery bays.”

The project has been compared to the Tom Cruise science-fiction film Minority Report, in which psychic journalists are arrested on CCTV before they commit the crime of not peppering articles with the most obvious possible clichés copied from other papers.

However, Stephen Fry has delivered a crushing blow to the project with an unfortunately-timed negative review on his Twitter feed: “++ungood crimethink brb txtspk lol.”