The ads are nevertheless anticipated to win many advertising industry awards and look good on the creators’ resumés. Vista has sold over 140 million copies worldwide, with many of those actually being installed and activated rather than replaced with XP. 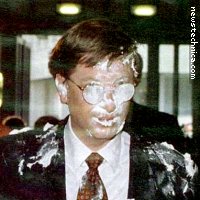 “The idea of the ads was to get people talking,” said Waggener Edestrom marketing marketer Frank Shaw. “‘Vista: An operating system about nothing.’ The original plan was to work our way back through the comedic genius of history. Bob Hope, W.C. Fields, all the way back to Aristophanes. Ya rly.”

Shaw denied Microsoft was un-“hep” and not part of the “happening scene.” “I think the overwhelming computer press and blogosphere response demonstrates their total success. There’s no such thing as bad publicity, as we keep telling the client. Look at the huge successes of the antitrust trial and stacking ISO for OOXML. Everyone knows their name and what they’re about!”

Microsoft will be moving to “phase two” of the ads tomorrow. “They’ll be spectacular. Completely object-oriented, database file system, better security, no legacy stuff, WordPad, Paint.” The new commercials will use a comedic structure suggested by consultant Bill Hicks:

“Vista’s slow, it’s fat, my software doesn’t work, I can’t get drivers, the User Access Control’s a pain in the ass and my network grinds to a crawl when I play an mp3! What do you call that?”

Apple, Inc. shares were up 5% in early trading.