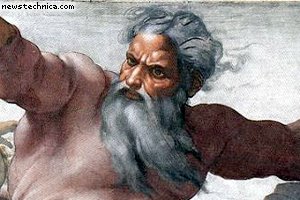 Creation of the Sun, Moon, and Plants (detail)

On the penultimate fresco of the Creation of the Sun, the Moon and the Plants it becomes clear that Michelangelo increasingly discarded iconographic and symbolic tradition. In the Creation of Woman, the Almighty is still standing upright in the 15th-century manner, but here the artist followed his own imagination. This, of course, entailed the danger of a lapse into obscurity and theatrical illusionism; to introduce a simple device from an early illuminated version of the Gospels into a composition treated in a more complex manner was bound to result in an impure style. On this fresco, God the Creator moving above the earth appears twice, once descending with a sweeping rhetorical gesture, and again wrathfully departing. The effect of this grandiose conception is not altogether satisfying. It is forced and lacking in the harmony that Michelangelo usually achieved with substance shown in a state of turmoil. The idea of uniting the third and fourth day of creation in a single composition was not a felicitous one.

Title: Creation of the Sun, Moon, and Plants (detail)