DAS BUNKER, Whopping, Tuesday (MSBBC) — Your Super Soaraway SUN has found the blueprint for Nick Clegg’s top-secret TV debate strategy in the back of a CAB, revealing he is a MARTIAN INVADER. 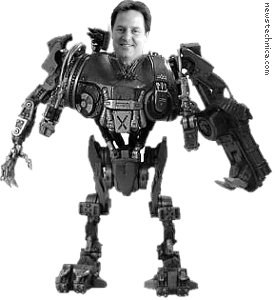 It reveals the Lib Dem leader STOLE DNA from David Cameron to DUPLICATE his style and cover Britain in a ROBOT ARMY OF CLEGGS, with BlackBerrys to be installed in all citizens.

“It’s very SLOPPY to just leave it in my CAB in a locked and alarmed SUITCASE,” said the cab driver, Andy Coulson, “and I thought people should know. That’s why I SOLD it to The Sun.”

Clegg DISGRACED himself in the television debate last Thursday, winning a mere 37% in BIASED COMMUNIST POLLS, while TORY SUPERSTAR Dave “Dave” Cameron topped the charts with a SURGE to 31% — despite foolish commentators claiming Clegg was less terrible than GORDON BROWN attempting to SMILE or the picture of DAVE CAMERON someone had PHOTOSHOPPED onto the screen.

“I used my PSYCHIC POWERS to talk to ADOLF HITLER after the debate and he would DEFINITELY vote Lib Dem now,” reveals luscious, pouting MYSTIC MEG in her political opinion column on Page 3 today.

The Tories have responded by DISTANCING themselves from the Liberal Democrats’ WASHED-UP, SOCIALIST POLICIES and put out new posters blaming the recession on the people responsible: POLISH ASYLUM TERRORISTS on THE DOLE.

“The Conservative Home web forum got out MS Paint and came up with some great stuff,” said Tory webmaster Andy Coulson. “Though they thought we should distance ourselves from those WISHY-WASHY, NUT-CUTLET-EATING LIBERALS at the Daily Mail, who are SOFT ON VOLCANOES and soft on the CAUSES of volcanoes.”

An article in the Völkischer Beobachter on Sunday by Andy Coulson REVEALED Clegg’s SPANISH wife, RUSSIAN grandfather and MARTIAN allegiance, and how he would definitely fail a proper Tory BRITISHNESS test.

“Fuck,” said Rupert Murdoch, speaking to his editors about the ACTUAL poll numbers.